The Alfa Romeo GT was launched at the 2003 Geneva Motor Show and was commercially available since January 2004. The car was manufactured at the same plant located in southern Italy, alongside Alfa Romeo cars such as the 147 and 159. 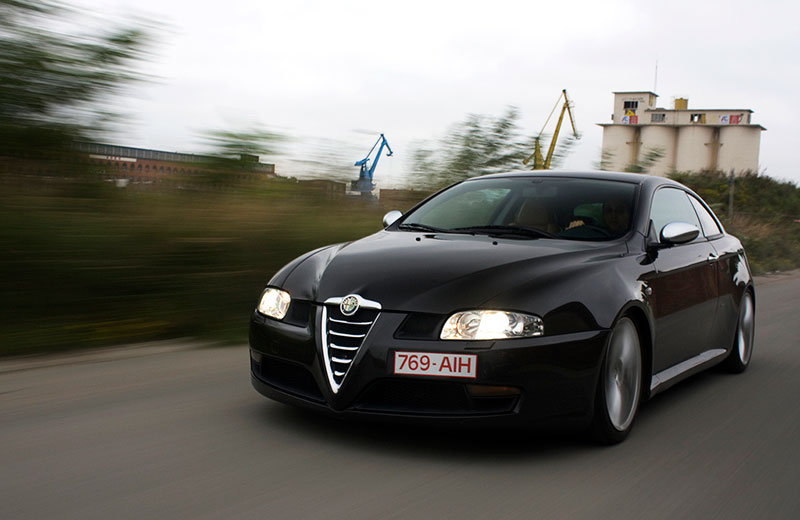 The Alfa Romeo GT uses the same modified version of Fiat’s Tipo platform, also used in cars such as the Alfa Romeo 155 and Alfa Romeo 156. Most of the GT’s mechanics and design elements were borrowed from the Alfa Romeo cars 147 and 156 with same front and rear suspension as the two cars. The car was designed by the Italian design firm Bertone and is known for its radical and sporty good looks worldwide.

The GT is designed in view of a sports car and is often teamed along with the Alfa Romeo Brera as the successful Alfa Romeo Sports cars of the first decade of the 21st century. The two cars are also viewed as the 916-series GTV. The car was featured with 16, 17 and 18 inch alloy wheels as option and a total of 4 different engine variants and 3 different types of suspension. Despite of being a 2 door coupe the GT has a 5-people seating capacity and features several modern technology mechanisms like electronic brakeforce distribution and anti-lock braking system etc. across the several trim levels the car has spawned.

In 2006 the Alfa Romeo GT was released in a new trim level called the Black Line which featured a 1.9 JTD Q2 version and a limited slip ‘Q2’ differential. 2008 saw the arrival of the Cloverleaf trim level which improved the car’s mechanics and features significantly with new colors, lower ground clearance and larger 18 inch alloy wheels. The engine variants featured with the Cloverleaf were the 1.8 and 2.0 Petrol and 1.9-liter Multijet Turbo diesel. The different engine variants and the list of available gearbox variants are listed as follow.

Produced only for the British market and was only available through pre-order. It featured a Q2 limited slip differential, a 1.9 JTDm engine and leather interiors.

With 60 available units, the Quadrifoglio Oro was manufactured specifically for the Japanese market. The car was powered by a 2 liter JTD engine and featured sequential clutch, red instruments, alloy wheels, red paint.

In 2003, Bertone designed a GT concept car called the GT Cabriolet but was only made public in 2011. The car is a concept of the next generation Alfa Romeo Spider, but the next generation spider was built instead by Pininfarina, which is known more familiarly as the Alfa Romeo Brera Spider. Image Credits @ FrédericLouis